I’d not seen until today this delightful bit of praise for our 2011 album, “Richie Kaye’s Music & Mirth, ” recorded with my colleague, Tony LaVorgna and Sam Kuslan (on two tracks).
“If you were looking for music that puts you on a “downer” or amplifies your “angst,” you’ll have to look elsewhere. I can’t help but thinking “Laurel & Hardy” (or Ozzie & Harriet, for that matter – back in Ozzie’s early days as a bandleader) as I listen to “Love Is Just Around The Corner“ LOL! You must remember that I grew up in an age when music like this was just giving way to the protest music of the ’60’s, so the idea of humor and FUN in music isn’t foreign to me at all. And tunes like the somewhat corny-sounding lyrics on “Sweet Tooth” aren’t actually as nuts as they sound. The idea back then was to cut a rug and have a ball and this kind of music allowed you to do just that. I give Richie and his sidekick Tony LaVorgna a HIGHLY RECOMMENDED on this one, with an “EQ” (energy quotient) rating of 4.96.” — Rotcod Jazz

Thumbtack has very kindly awarded me with a spotlight! 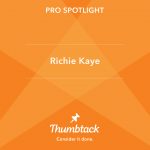 (Click to the image to read the brief interview.)

A fun note about “I Left My Heart in San Francisco.” I first learned it in Japan and out of necessity. In the 1980s, it and the Tennessee Waltz were the two most requested English language sing-alongs. In between the enka (演歌) — Japanese popular music that sounds traditional — I would nestle a few of these.
Patrons would send over $150 bottles of Nikka to me after singing these numbers — something that occurred repeatedly. But the man who liked to hear me sing the most, other than my mentor and dear friend Hayano-san 早野 (whom I miss terribly to this day), was not an ordinary every day kind of person He was a made member of the Osaka yakuza and as tough and crude a man, smiling constantly, as ever I have met. And I met him by chance. I was briefly hospitalized (a reaction to the gold flake in sake, I am told, or my drink had been spiked) and he was in the bed next to mine.
Covered neck to waist in colorful tattoos, which he proudly displayed and explained to me that included a jinja (shrine), a beautiful and barely dressed blonde and markings that showed where he belonged in the organization. And, of course, he showed me his pinky, which he’d severed at the first joint, in ritual fashion and without anesthesia. I was grateful when he taught me how to curse like a gangster in the Osaka dialect. It actually got me out of a scrape once.
Being young and adventurous (I’m still both, but wiser), and actually liking this guy a good deal, I accepted his invitation to his club, where I got up and sang, after some heavy drinking. Thinking back on this, he could have been setting me up for a huge bill — drinking whiskey at a club routinely cost many $100s. But he didn’t. Instead, he had other of his black-suited gangster friends along to toast our collective health as we all sang, “I Left My Heart in San Francisco.” It was a great night.

A few songs I added this month to my solo show repetoire:

Blame It on My Youth (Nat Cole)
Goodbye is All We Have (Alison Krauss)
Your Song (Elton John)
If I Ruled the World (Sammy Davis, Jr.)
Georgy Girl (The Seekers)
This is a Great Country (Bing Crosby)
You Won’t Be Satisfied Until You Break My Heart (Doris Day)
I Left My Heart in San Francisco (Tony Bennett)

Some of the songs you’ll hear in my new solo show (with the groove and the performer name people associate with the song in parentheses):

There’s something for everyone!

My new solo show is just archtop guitar and voice. It’s not loud, so guests at a party can chat without distraction or, if they choose, sit and listen. No fuzzwah, no flanger, no roto-vibe, no echobox. Nothing avant garde, nothing crude, nothing in your face.

Just American melodies you know and love, but probably have never heard before! Ballads, up tempo, Latins, old vaudeville numbers, 50s showtunes, honky tonk, gypsy, scat, classic country, light rock and the occasional obscure song that should have made it big. A lot of variety for your party or event.

And when your budget allows it, additional instruments fill out the sound: piano, upright bass, clarinet, saxophone. Let me know how I may serve you!

In my new solo show, I’ll be playing and singing the songs of (or made famous by) Irving Berlin, Charlie Rich, Rodgers & Hart, Elton John, Betty Hutton, Jack Jones, Orlando Murden, Vaughn Monroe, Jaime Cullum, Margaret Whiting, Steely Dan, George Jones, Comden & Green, Roger Daltrey, Schwartz & Dietz, the Beatles and yours truly. And many other great names in song in jazz, Broadway, classic country and light rock. All melody, all the time: songs you can sing along with!

An Update on Piracy and Infringement of My Recorded Work

In the past year, I’ve issued hundreds of takedown notices to websites where my copyrighted material may be downloaded or streamed without my permission — of course, taking income from me. These sites rely upon the DMCA Safe Harbor provision or its EU equivalent to avoid claims of infringement.

“The Last Whoop-dee-doo” was offered as a download free of charge from thousands of webpages, many of which were apparently hosted in Russia, Poland, Turkey, China, Israel and India; and streamable through many services without my permission — and accessible through U.S.-based servers and web searches. As recently as last week, Slacker Radio was streaming without permission the entirety of Fire and Fall Back. Slacker has not yet responded to my demand for an accounting, but should I ever receive one, against what reliable data can their assertion be vetted? (As an aside, FaceBook Ads could never justify their claimed clickthroughs by proving the IPs where they originated were not sourced through a click farm! I fought them on this and got all of my money back.)

None of my recorded work is as easy to find free of charge as it once was, but the damage has been done, to me and directly to my wallet — thousands of downloads mean that I have lost many $1,000s in revenue, all the while Google rakes in the big bucks serving ads on Torrent sites. Google is, even from a most charitable aspect, the single greatest facilitator of piracy the world has ever known. But, in that environment, you decide whether to steal.

In the 19th century, Americans were book pirates. A best-seller in England was a sure-fire sale for Americans who blatantly and copiously ripped off authors and publishers with pirated publications. Publishing fortunes were established upon this theft. I have many examples of these books in my library. The age of book piracy came to an end around the beginning of the 20th century with new laws and civil enforcement through the courts.

It is not new. Men are thieves whenever they can be; when, conscience-less, they gambit that theft is unlikely to harm them. I would hope that you, as a fellow musician, do not and will not torrent the recorded work of others. And, in fact, encourage your friends not to steal. Why? Because the Lord your God will send you to Hell? Well, some believe that.

But let me suggest this. If you consider yourself no better than an animal, you steal. Just watch these awful creatures:

You could, instead, act as a civilized man and respect the property of others; as a gentleman when you pay for what you use; an an artist, when you acknowledge the work and the money that goes into a recording. It’s your choice. What kind of musician do you aspire to be?

Welcome to my newly designed website! I hope you like it. Kianna Chauntis was my talented designer whom I’d recommend to all of my friends. Visit her portfolio here.

Read about the music Richie's making and listening to.

Invalid email address
We promise not to spam you. You can unsubscribe at any time.
Thanks for subscribing! Please check your email for further instructions.