All I can say at this point about our session last week at Wire Road with Tony LaVorgna, Ernesto Vega and Thomas Helton is that it was fantastic.  I can’t share any audio of it yet with you because there is more writing and recording to come in this project in 2018. But let me share my favorite picture of the day.   Tony and Ernesto in the studio. I love this image very much. (I think they’re talking about reeds, funny enough…) 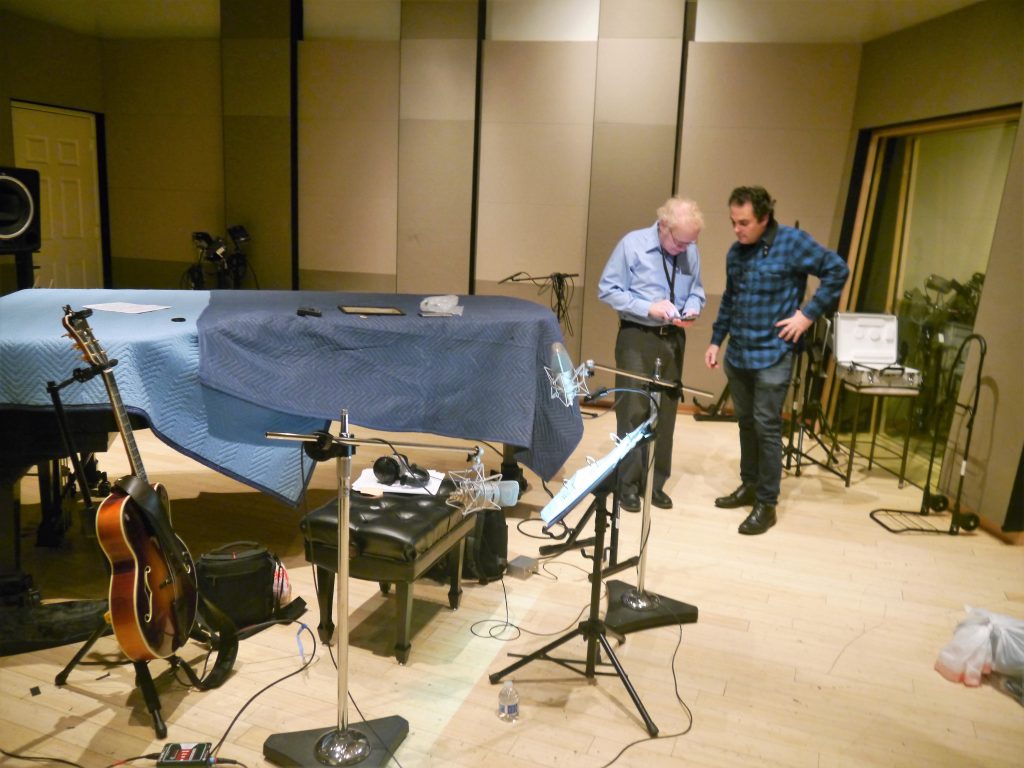 In the studio today, mixing quartet tracks with Tony LaVorgna and Andy Bradley (engineer Wire Road Studios in Houston) and recording a few new originals with my Bedell Guitars Revolution prototype. I’m recording voice into a Neumann U87. The guitar is going into a stereo pair of Schoeps Mikrofone CMC641. Great sound! Can’t wait to share it with the world and all of our friends.

My dear friend and colleague, Alice Schweitzer, who passed away last year, was a member of the Woodside Sisters.  She was also friend and colleague of my recording/writing partner Tony LaVorgna.
We’d heard stories that the trio was competition for The Chordettes, but neither Tony nor I had ever seen the sisters in a live performance because they’d disbanded decades before we worked with Alice.
Until today, when I discovered this routine in a YouTube video.
You’ll see them introduced by the great and wonderful Fred Allen, filmed in 1953. The routine starts at about 19:01. Alice starts the routine, center stage. They really were the tops. And to think, just 65 years ago, the land was teeming with acts at this level of variety performance.

Missing also in the young person’s musical diet is a love of (or even mere exposure to) classical works. No allusion to the classics can be found in any — and I mean none at all — pop or jazz or showtune since 1968. This is something that must be remedied.

Sure you might find an exception to prove this generality technically wrong, like Disco Beethoven in 1976. But the point is this: the older writers of sophisticated popular music listened and learned extensively from great tradition.

Here is an example of wholesale copying! The music is ascribed to Paul Weston, but it’s clear where it comes from. When it was issued, I think most laymen who considered themselves musically literate would have known it is Chopin. And of course, the musicians, the composers, well, surely they did.

Watching this to learn from Ray Price, ca. 1955.
Funny, but, forgive me for saying so, it seems like a foreign country. Like Lapplanders celebrating the coming of spring.
Aside from his singing, which I adore, here is what I admire in this performance: its modesty, the lack of pretence, the unassuming rhythm, its regularity and certainty, the melody easy to sing and to follow, the simple but essential harmonies, clarity in the lyric and superb diction, the joy with which it is delivered and received by the audience. So much to learn from.
I admire the song with a seemingly simple lyric that can be sung “away from” its plain meaning, because there is, between the lines, something not obvious at first glance. This is what the singer can bring out in his delivery.
Since I’m listening to a lot of Waylon lately, let me use “Sandy Sends Her Best” (1973) as an example. The singer writes his former lover (who has, in his own words, waited “faithfully” for him) to tell her he’s running off with Sandy. The letter, which is the entire lyric, is a cruel, selfish, unapologetic statement of abandonment, which the cad who wrote it did not dare make face to face.
Perhaps the most faithless line, kicking sand in the face of one you’ve knocked down is this:
“Sandy sends her best and she and I both wish you well.”
Can you imagine the gall? But Waylon, with that very subtle masculine charm has a way of singing it, that one may even sympathize with this rotten S.O.B. Quite a chanteur he was, bold and daring, without much flexibility in his vocal tone or command, but a real master of exposing subtle intention in song.
More songs added to the solo repetoire:
For the Good Times – Ray Price
Help Me Make It Through the Night – Anne Murray  (I’ll probably use two verses and the bridge twice in a medley)
The Girl on the Billboard – Del Reeves
I’d love to adapt Petula Clark’s Don’t Sleep in the Subway for solo guitar and voice, but there is so much in the original recording with full orchestra, like that classic electric bass in the bridge and the natural reverb of the studio in which it was recorded. The only way to crack the nut, I think, is to take it in another direction and make it about the lyrics, rather than the whole musical experience. Must think on this one.
Never heard it before? You’ll love it! Just adore the spirit in which it’s delivered.
(My gosh, I just discovered the GREAT Tony Hatch wrote and scored this song. He’s my English Don Sebesky. Everywhere!)
Many thanks to Esther who plays two tracks from our (with Tony LaVorgna) album, A NYC Subway Christmas, on the The Spin-O-Rama Hour podcast of Dec. 3. What company! Danny Kaye, Carol Burnett, Nat Cole, Harry Connick, Wayne Newton, et al.
To listen to the show click here.

I’m grateful for our liberties, given by God, enshrined in our founding documents, because of which, given the sacrifices of those who came before, I can sing my own voice, without compulsion, any song I please to sing.

Not too many years ago, when I first heard her, I thought Judee Sill could not sing. I even thought, oh God, another hack. That plain tone, Ohio accent, the focus on the bridge of the nose… (Can you imagine me doing this as a younger man? I’m sure you can.)

But I listened again, almost in contradictory fashion to my own will, having heard something very close inside of me. And then her voice opened within me. Or should I say, I opened to her voice.

I had forbidden, for some reason, myself to be touched at the level she reached in the way she chose to reach it. I learned to listen differently, beyond the notes and the words, if I might say, without resistance.

That’s what I learned from Judee Sill. I am sure, from what I’ve read about her, that she would never have entertained the possibility that decades after her death anyone would remember her existence on this planet, or that someone might be improved by what she’d recorded so many years before.